I think it’s safe to say that Spring has sprung!

Ren Jun’s silver, fluid, sculpture gleamed in a cloudless blue sky, the Fraser River sparkled in the sun, birds soared effortlessly overhead (or perhaps that was a Lear Jet) and a brightly coloured trail of smiling parkrunners all looked absolutely fantastic by the waterside.

My weekly parkrun feel good factor was already topped up, and we hadn't even started yet

It wasn’t just the weather that boded well. This was the 125th Richmond Olympic parkrun - a number that has all sorts of symbolic significance. For mathematicians it’s a composition of “a single prime number multiplied by itself two times”, which is very cool! For the more touchy-feely numerologists it “signifies new beginnings” apparently. And not only that, but we were visited by an actual Beaver cruising past us in the river, a sign loaded with of all sorts of auspicious goodness in traditional folklore. 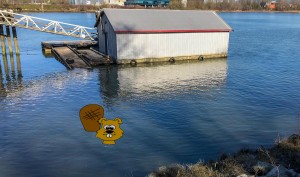 And so it was that 97 parkrunners, the second highest turnout ever, were marshalled to the start line by this week’s excellent RD Julia HILL. At the appointed hour timekeeper Bianca BAKER clicked the virtual stopwatch button, shouted “go” and we were off. 97 pairs of legs (many exposed to the sun for the first time this year!), quite a few buggy wheels and even some nordic pole tips were in beautiful motion. 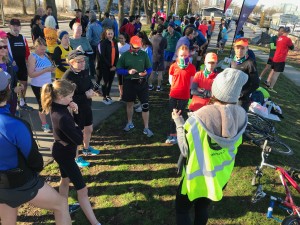 As usual Richmond Olympic attracted many visitors from other park runs around Canada and elsewhere in the world (especially the UK and South Africa). It was great to welcome and meet the hugely experienced THOMAS family from South Africa; Kathryn, John and James EBREY, Leia MILLS, Liz and Mick HAREN, Hayley-Dwan HO, Robert BROW, and then there was me and my wife Moira visiting from the UK too.

Eva and Ian TAYLOR were among a few returning visitors, last running here two years ago. They were also the week’s most experienced parkrunners with 287 and 291 runs respectively, and if that wasn’t enough Ian ran a PB time too!

On a personal note it was great to see Len HOLLAND setting a PB here on his fourth run at Richmond Olympic. His “home” run is Rushmere just a few miles away from where we live in the UK. I’ve ran and volunteered there are know many of the great core volunteer team. Small world!! The international parkrun family in action. 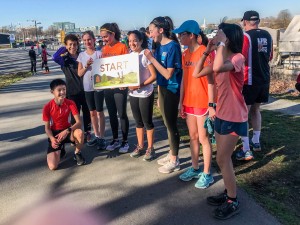 The fair weather also encouraged a rash of PBs (maybe that’s not the right word). 21 in total - great work by everyone. I’ve mentioned two of them already and a special shout out should go to Stelios STYLIANOU for his fourth PB in four appearances. On a similar note it was 3 PBs in 3 appearances for Rob REID, May WANG and Rita NGAN. Great stuff.

At the start we all acknowledged Mami KUBO’s 50th parkrun - she went on to emphatically mark that milestone with a PB too!

As we always say, parkrun is “not a race”, but it’s always interesting to see who has managed to move their legs at an impressive pace. This week our first female finishers were Selin TASDEMIR, Lisa ROSSETTO, and Claire BOSMA. Selin and Claire were both (as noted above) first timers and so a special “well done” to them.

The male first finishers were all in the same 25-29 age group: Daniel LEWIS (first finisher for the third time and who also set a PB by a canny 2 seconds), Ed GRAHAM (who has previously finished first on 5 occasions) and Nick DUNN (who also set a PB).
Since I am most certainly not in the 25-29 age category I always like to look at the age-adjusted finishing times. Here we see three completely different names. First was Judy WESTACOTT. (75.3% - and the 7th fastest age graded result in Canada this week); Malcolm SMILLIE (72.6%) and Ryusuke KUBO (71.75%). Anything in the 70%+ range is quite an achievement of fitness and dedication.

There were many other notable results too. First of all congratulations to Emma VINNIE who managed to run her own 125th parkrun at Richmond’s own 125th! It was her 40th at Richmond, most of her others being done in another glorious city: Edinburgh.
As an aside Moira and myself are from Aberdeen in Scotland and so arriving at Aberdeen station in Richmond made us smile.

Back home I’m an RD at Tring parkrun (come and say hello if you are ever in the area!) and have a weekly “most aesthetically pleasing time” prize. That award stayed in the drawer this week sadly. If Merina LAU had crossed the line 2 seconds earlier she would have had an impressive, ascending time of 23:45. Or if Daniel LUK had speeded up by four second he’d have finished with an equally impressive, descending 32:10. Close but no cigar!!

I’d love to give a special mention to the 3 stroller pushers, but I missed their names. You know who they are. Respect.

And a final mention to Jaroslava DVORAK and Jana VASICEK - who earn this week’s wildlife spotting badge, having pointed out the Beaver in the river. 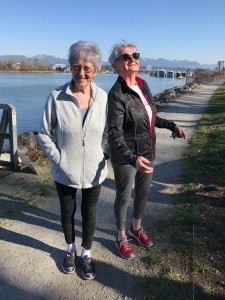 Of course all of this was made possible by those helping out and volunteering. In addition to Julia and Bianca, mentioned above, I’d like to thank Riccoh TALENTO for marshalling; Damon NEWMAN for handling the finish tokens; Nick DUNN for barcode scanning; Lien TRAN for tail waling (loved the actual tail!); and Laure THI and Becky MAYBURY too for looking after kit and volunteer rosters respectively.

We encourage everyone to volunteer now and again (even as a report writer!), it’s great fun and really rounds out the whole parkrun experience. Drop us a quick email at richmondolympichelpers@parkrun.com to let us know when you can help or if you’d like to find out more.
In fact I’d like to thank EVERYONE involved, we really enjoyed Richmond Olympic parkrun and our chats in Timmies afterwards.

P.S. A special thanks to Jonathan and Bianca BAKER for all the top tips about Vancouver, all the other conversations and for generally just being great!